Dallas Willard on the Good Life 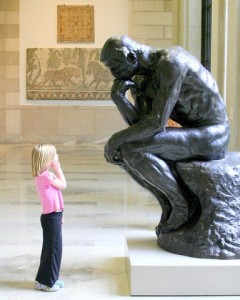 The strength of a man’s virtue should not be measured by his special exertions, but by his habitual acts.
–Blaise Pascal

As a distinguished professor at the University of Southern California, Dr. Dallas Willard has gained the respect of those in academia. He has also gained the respect of mainstream audiences by writing bestselling books on topics of spiritual formation and religious thought. As an author, he’s certainly in a different league than I. One of his books sold more copies in a single day than the three of mine have over the course of five years. When talking with him, I feel like I’m like the little kid in front of the Rodin statue in the side image.

Dallas briefly mentioned other popular views of reality. One could believe in a power-based version of reality in which life is about gaining the most money or power within one’s society. Or, one can take a scientific materialism view that leads people to believe that we are just a bunch of atoms that have coalesced by chance to produce this thing called life. He admitted that he is a philosophy professor and not a preacher, so he lets others decide what version they think is best for them.

He said that I was correct, more specifically, the answer is the Sermon on the Mount. No other speech has had the same massive influence. Nearly every society of the Western world for the last 2,000 years has been impacted by its message and the actions it has inspired. This fact has helped him trust in the Bible to be a source of knowledge that guides him through life’s complicated paths. He believes that everyone, not just old professors like himself, can be positively impacted by following its timeless truths.

I do not expect you to agree with all of Dallas’s thoughts, and I hope this chapter did not come across as preaching about religion. The main purpose of this chapter was for us to look at the Good Life by answering four questions that put the Good Life question into a philosophical framework.

After talking about philosophy in this chapter, we will discuss the philosophy of happiness and how it can help us find the Good Life.

Superficiality is the curse of our age.  The doctrine of instant satisfaction is a primary spiritual problem.  The desperate need today is not for a greater number of intelligent people, or gifted people, but for deep people.
–Richard Foster

I  know the power obedience has of making things easy which seem impossible.
–Teresa of Avila

The world can no longer be left to mere diplomats, politicians, and business leaders. They have done the best they could, no doubt. But this is an age for spiritual heroes- a time for men and women to be heroic in their faith and in spiritual character and power.
— Dallas Willard