There are two great days in a person’s life – the day we are born and the day we discover why.
— William Barclay

I trace my journey to find the “Good Life” back to the Ivory Tower of Yale University. I began my investigation into this subject after an unexpected conversation with a brilliant student.

It all started after a long day of classes at Yale. When I returned home from the library after dark, my next-door neighbor invited me to join her and some friends from Yale’s MBA program at her home for dessert. Though I needed to write an essay, I couldn’t refuse.

When you are a graduate school student with no source of income, you learn never to turn down free food, especially the type served at Yale parties and get-togethers. I also thought that hanging out with business students would allow me to take a break from my studies on philosophy and religion. Thinking too much about God and big-life questions can cause a headache, so it’s helpful to balance out the day by talking about less dense things like news, sports, and campus events. However, I was unable to avoid all talk about religion when someone asked me, “So what do you study?”

When I tell intellectual people that I enrolled at Yale Divinity School to study how religious faith shapes modern life, I usually get two reactions. The first is, “Oh, you must be one of those crazy religious types who believe that we should keep promoting superstitions that should have died out centuries ago.” The other reaction is a positive one that develops from the open-minded attitude at places like a university. The people with the positive response usually find it very interesting that I’d want to take a couple years to study life’s hardest questions, even though I have no desire to become a priest or work in a church. Fortunately, the reactions that night were more of the latter. The business students saw their Ivy League degrees as an investment to give them success in the business world; they saw my studies at the Divinity School as an investment for me to succeed in the game of life.

Others in the room wanted to move on from talking about religion, but one named Harsh Poddar wanted to hear more about what I had learned from my studies.

“Sorry, your name is Harsh?” I asked this young man from India who looked my age.

My first impression of Harsh was that he would be a hard-working boss who would demand a lot from his employees. While he may be like that in the business world, I learned that this was far from an accurate description of his true personality. Harsh is not only a kind, considerate person, but he also shares my interest in wondering whether succeeding in life is something that is accomplished through religion, introspection, making money, relationships, social interactions, or a precise combination of all these.

That night we mainly talked about our views of religion. He explained that he had grown up as a Hindu in his hometown of Calcutta, India, but had been exposed to a variety of religions in his studies of economics and engineering at Duke University. He was very interested in what religion had to say in regards to the questions that business or science could not answer.

Noticing that our conversation was something in which no one else in the room was particularly interested, I asked Harsh if he would be free the next day to talk further.

The Heart of the Ultimate Question

Because it was such a beautiful day in Connecticut, we decided to forego meeting in a coffee shop and instead walked around Yale’s historic campus. What was supposed to be a 30-minute appointment on my schedule turned into a 2-hour walk during which we talked about what defines a successful life.

Experiencing success was not something new for Harsh. While in his early 20’s, he had already started two businesses in India (an IT firm and a shipping company) one of which is still in operation. Before graduating college, he had made more money than what many of his countrymen make in their lifetime. In business terms, he was already a success. With the help of Yale’s MBA, he is sure to be a great business leader for the rest of his life. But even though he has so much going for him in terms of business, Harsh admitted that he felt like there was something missing. He felt that he would not be ultimately fulfilled if he were only to continue his career path and make a billion dollars and appear on the cover of Forbes Magazine.

The rest of our conversation centered on topics that lie at the heart of the Good Life question. We asked each other, “What is the standard for determining good?” “What is more important: happiness, security, or success?” “How do we define things like happiness and success?” I promised Harsh then that we would keep each other accountable for trying to answer these questions. The rest of the chapters in this book are my attempt to do just that.

I include my discussion with Harsh at the beginning of this book because it highlights a theme about the Good Life that I wish to make clear. Harsh is someone from whom I unexpectedly learned a lot about life – he is younger than me, works and studies in the business field, and comes from a completely different religious system – yet I have been able to learn a lot from his perspective.

In reading this book, you may not agree with all the views of those I interviewed, but I hope you approach them with an attitude of wanting to learn from them. I have learned that no one has a complete understanding of the Good Life. Hopefully, in talking to a variety of people with unique perspectives, we can gain insight into what comprises the Good Life. After seeing life from their eyes and putting ourselves in their shoes, we should be able to formulate our own picture of the Good Life and how we can experience it more richly each day.

I was early taught to work as well as play,
My life has been one long, happy holiday
Full of work and full of play,
I dropped the worry on the way
And God was good to me every day.
— John D. Rockefeller, Age 86 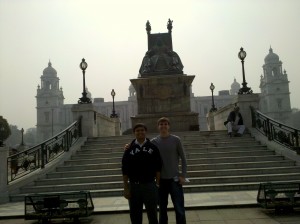