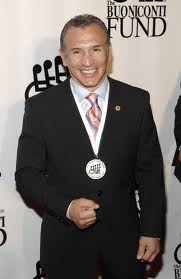 A champion shows who he is by what he does when he’s tested. When a person gets up and says ‘I can still do it’, he’s a champion.
— Evander Holyfield

I was passing time in a bookstore when someone called me to make a business appointment. The person asked if I wanted to join him for lunch at his “family’s restaurant.” I knew from this person’s page on Wikipedia that he was formerly a professional boxer and now works in the film industry in Hollywood. His instructions on the phone were simple: park in a back alley or in a garage off that ally. He said there would be a table waiting for us. The man’s voice had enough of an Italian accent that made this situation sound a little like a scene from The Godfather or The Sopranos.

The story that led me to this Good Life conversation is worthy of sharing. It all started when I was checking emails one day while I was at Yale. I had been applying to various jobs and was hoping I’d hear something back from a potential employer. What I found in my inbox that day was a job offer for something I had not even applied for.

Someone named Joey had sent an email to the address associated with my book The American Truth. He said that he had just finished reading my book and thought it was the most interesting book he had read in a long time. In the email, he asked if I had ever considered making it into a movie. Since my novel is based on conspiracy theories that many find absurd, I never know how to react to fan mail. Some of those who are interested in conspiracy have a reputation of not getting out that much, if you know what I mean. I usually just thank them for taking the time to write and acknowledge any questions they have. However, luck would have it that this reader was not one of those “crazy conspiracy theorist;” he was someone who had friends in Hollywood who wanted to pay me to get this book made into a movie.    After a few friendly emails and phone conversations, he bought the rights to The American Truth and paid me to write the screenplay.

This opportunity was special to me because I once envisioned myself as a professional screenwriter. I once considered abandoning my studies into business and religion to move out to Hollywood to become a noteworthy screenwriter. Fortunately, I listened to wise council back home and made the decision to continue my studies.

This new short-term project gave me a taste of what it would have been like to be a professional screenwriter. And, more importantly, it gave me the experience of what several say is a component of the Good Life – achieving the dreams you had in your younger days.

After completing the script, I flew out to Los Angeles to meet one of Joey’s connections who was an owner of a production studio. There I was, a little-known writer from small town Georgia, flying across the country to meet with a big shot in Hollywood.

Though I grew worried that I was about to meet members of the Italian mob, I quickly realized that was just my imagination gone wild (I am a writer after all). The “family restaurant” was an upscale restaurant was in prime location in Santa Monica, one of the nicest areas in Los Angeles. I was instructed to go down an alley because the main street was a major highway that prevented you from making a left turn.

Unfortunately, no deals were made at the lunch meeting, and The American Truth will probably never hit the big screen. However, the whole experience was well worth it because this Hollywood “big shot” turned out to be an incredible person who knew all about the Good Life.

Ray Mancini is currently the executive of Champion Pictures, but in a former life, he was a world-champion boxer who earned the nickname “Boom Boom” Mancini. Ray followed in his father’s footsteps and was able to claim the World Lightweight Champion tittle that eluded his father (his father’s hopes were shattered when he was drafted to fight in WWII and suffered from a serious wound in battle). After his boxing career, Ray used his prize winnings to pursue another one of his dreams of being an actor and producer of Hollywood movies.

To discuss the screenplay, Ray invited me to join him for lunch at his “family’s restaurant” Il Forno. When I arrived there a bit early, I found that there was a table waiting outside with a “Reserved” card for us. “Wow,” I thought to myself, “the only thing missing is a red carpet leading to here.”

When he arrived, I started introducing myself when our waiter came up and asked, “What will it be for you today, Boss? The usual?”

“Yes,” he said in an accent that showed his Italian ancestry. “Start me off with the usual to drink, but I’ll look over your lunch specials.”

I couldn’t help but comment. “They call you Boss here? Didn’t you say that this is your family’s place?”

“Yes, but they aren’t my real family. I just say that because we’re so close; they’re like brothers and sisters.” He motioned above us to an office building on the second floor. “My office is right up there. I walk downstairs and come here every day for lunch.”

He then explained to me how he loved having a place where everyone knew him by name and respected him for the person he was, not just because he was a famous boxer or had connections in Hollywood. Nearly everyone at the tables surrounding us walked over to say hi and Ray generously introduced me to all his interesting friends and colleagues.

Eventually our waiter came back and set down a full glass of red wine in front Ray. “Here you are, Boss. One Boom-Boom. Now what can I get you for lunch?” Ray and the waiter then went on to have a discussion in which they talked with their hands on the best low carbohydrate option on the menu.

I turned my attention back to Ray’s drink. “Boom-Boom?” I asked, recalling that was his boxing nickname. “Do they know you so well here that they name a drink after you?”

“Not just at this place, wherever this wine is sold.” He went on to explain how he learned from his family how to enjoy a glass of wine with a meal. “I figured that if this is something I enjoy, I should invest in it and be involved in creating something that is up to my tastes.” He told me how he had fun visiting various vineyards and choosing the wine he most enjoyed. Ray contacted the vineyard and must have given the vineyard an “offer they could not refuse.” They have been partners ever since, selling this Cabernet Sauvignon with Ray’s personal name on the label. Ray admitted that he also enjoyed chocolate and cappuccino and was looking into creating a Boom Boom Bar and cappuccino brand soon.

I asked him if he had always been so entrepreneurial minded in wanting to be involved in so many different operations. He said that during his boxing career, he was forced to commit his whole life to the sport. However, he has always had a variety of interests. After he first retired, he started a cigar company in Los Angeles. He said that this business endeavor was like several that he has had – they are not very lucrative, usually they break-even, but they allow him to be involved in something that he loves and that is far more important than the possibility of more wealth.

As the waiter served us our bread, I noticed that Ray was careful to only have one piece with a little olive oil. I looked over Ray’s physique; he looked like he could still throw a mean left hook. “Is that your secret to keeping in shape and looking good – cutting carbs?”

As he was talking about moderation, a couple of muscular guys with tattoos walked up to our table. Ray introduced them to me as members of the Brazilian jiu-jitsu gym he opened a couple blocks away. One of them was a champion originally from Brazil, and the other bragged about how he was the better looking whom Ray had chosen to be an extra in one of his films.

“Wait a minute. You opened a Brazilian jiu-jitsu studio?” I asked. “You’re interested in boxing and martial arts?”

“Certainly. Like I said you’ve got to have balance. It’s great exercise. I can still go for over an hour on the [punching] bags and jump rope, but after six minutes of jiu-jitsu wrestling, I’m exhausted. It’s a workout for your entire body.”